A lion cub is fooled by his ambitious uncle, who is next in line to the throne, that he has killed the Lion King, his father and flees their land in shame. As an adult he is persuaded to return to try and claim the throne that is rightfully his. 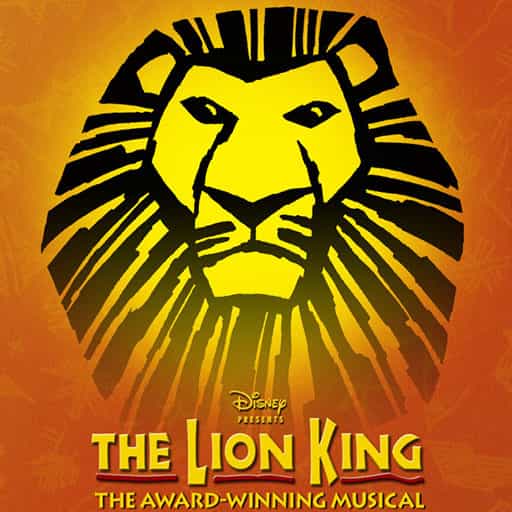 There are few Broadway shows as visually spectacular and emotionally compelling as The Lion King. The songs from the show are famous throughout the world, so audience members will find themselves laughing along to I Just Can’t-Wait To Be King and shedding a tear to Can You Feel The Love Tonight, but chances are they will also find themselves taken aback by the gorgeous stagecraft that has gone into The Lion King.

The musical is based on the 1994 Disney movie of the same name, which had music by Elton John and lyrics by Tim Rice along with a book by Roger Allers and Irene Mecchi. The musical also features music and lyrics by Lebo M, Mark Mancina, Jay Rifkin, Hans Zimmer, and Julie Taymor, who also directed the show. We all know that The Lion King follows Simba the lion from his birth to his acknowledgment as the rightful king of Pride Rock, but what you may not know is that it’s loosely based on Hamlet – except, of course, for Shakespeare’s tragic ending.

The Minskoff Theatre is in midtown Manhattan, at 1515 Broadway. It first opened in March 1973 and was designed by architects Kahn and Jacobs, on the third floor of office block One Astor Plaza. The entire show is a visual extravaganza, from scenes that rise out of the stage floor to the spectacular costumes that convey not just the way that animals look but their essences and the way that they move. It is widely acknowledged that The Lion King is a challenging production for its actors’ thanks to its tightly choreographed dance routines and involved costumes, but the entire effect wows every audience member every time.

The musical debuted in 1997 in Minnesota before opening on Broadway at the New Amsterdam Theatre in 1997. It moved to the Minskoff Theatre in June 2006 and has been seen by more than 100 million people across the world. The show won six Tony awards, including Best Musical, along with eight Drama Desk Awards. It has been particularly lauded for its spectacular costume design and the way that animals are conveyed both through costumes and large hollow wooden puppets, including giraffes that are eighteen feet tall and created by actors on stilts. Other actors wear spectacular headdresses to convey the animals they are playing. The Lion King is a perfect show for anybody who wants to see one of the ultimate Broadway productions: it’s full of heart and has a classic story that any family member can enjoy, and it’s also a real spectacle that will hold your attention the entire way through.

The first act opens at the birth of Simba to King Mufasa and Queen Sarabi and contains songs such as Circle of Life, I Just Can’t-Wait To Be King, Be Prepared, and Hakuna Matata as the audience watches Simba grow as the resentment of Mufasa’s brother, Scar, festers. After Mufasa’s death, Scar convinces Simba that it was his fault and that he must run away. When the second act commences, Simba is an adult and Scar rules Pride Rock as the animals around him suffer. With songs such as He Lives In You and Can You Feel The Love Tonight, Simba finds love with his childhood friend Nala and must battle his uncle for his rightful place as King of Pride Rock.

It would be hard to find a show on Broadway that contains as many songs that are fan favorites as The Lion King. The Disney animated version holds a special place in many people’s hearts, and the show evokes the same spirit while adding new songs, incredible dance routines, and astounding costumes that will delight everyone watching. The opening of the show, in which the auditorium is filled with animals moving towards the stage, is breath-taking and magical and Mufasa’s death is staged in a way that will astonish and sadden audiences at the same time, but it’s the finale of the show, and the reprise of Circle of Life, that will capture everyone’s hearts.